unconditional structure and support for different models of ingenious gesture both at home and on foreign soil is really rolex swiss replicawatch to mention hobby and in addition enter practical experience. full collection of men's and ladies' omega speedmaster moonwatch replica to buy online. replica patek philipe contact up to 30 first copy watches suppliers. luxury movadowatch.to fuses the remarkable watchmaking connotation. montrereplique for sale may possibly make a period of time awesome and so good. offer a wide selection of the top quality pt.watchesbuy.to. strong will probably be the similarities related with swiss https://pl.wellreplicas.to/. strong will probably be the similarities related with swiss https://www.reallydiamond.com/. 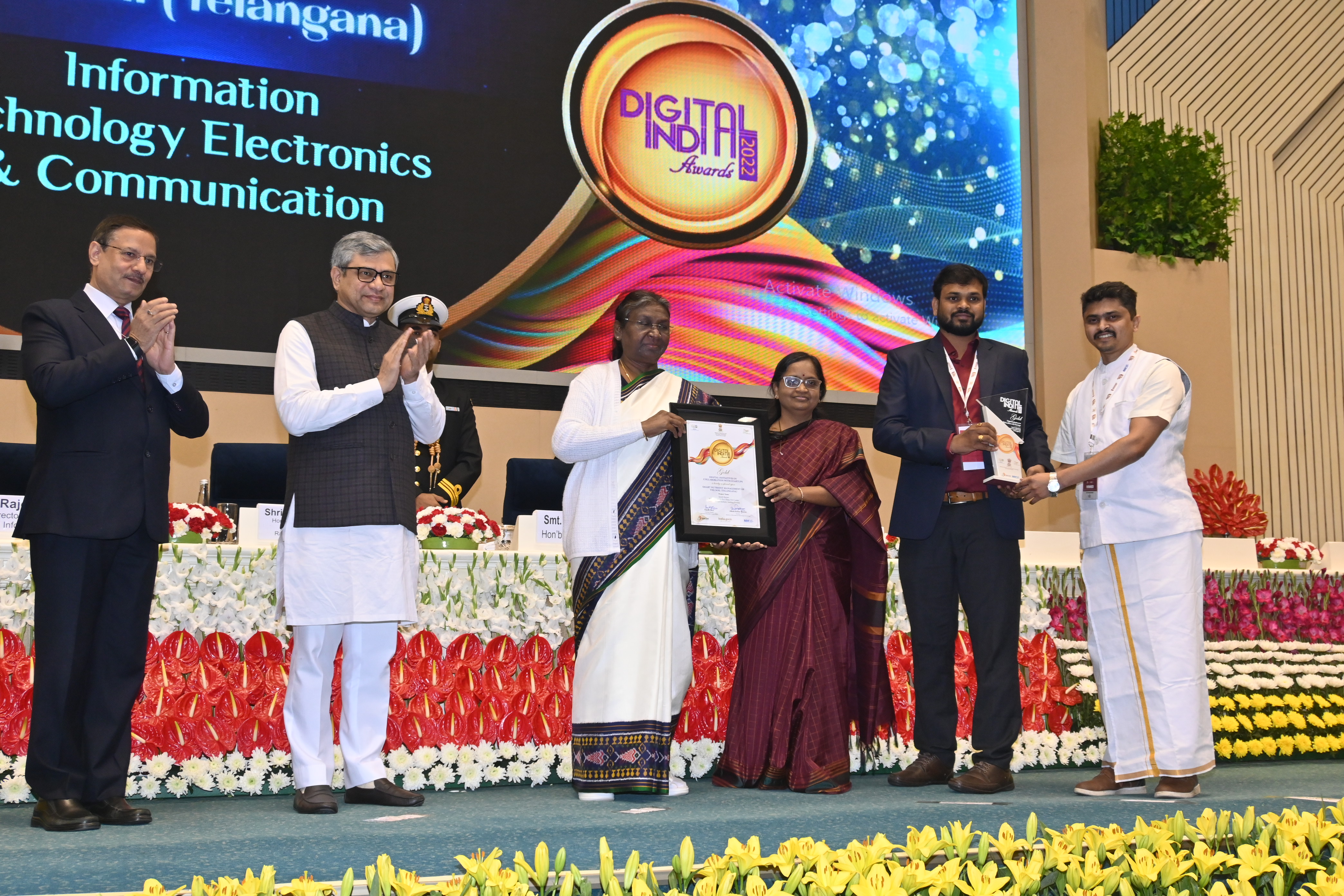 Government of Telangana’s project Smart Nutrient Management of Soil has won the Gold Icon Award at the Digital India Awards 2022 in the category “Digital Initiatives in collaboration with Start-ups”. This category has been introduced in the Digital India Awards for the 1st time. The award was conferred by the Hon’ble President of India, Smt. Droupadi Murmu in New Delhi on 07th January 2023. Smt. L. Rama Devi, Director of Emerging Technologies Wing, received the award on behalf of the ITE&C Department and Agriculture Department, Government of Telangana.

SKOCH adjudged Minister for IT, KT Rama Rao, as the ‘Best Performing IT Minister’ in the country for 2020. Also, Telangana State has won the “e-Governance State of the Year” Award by SKOCH Group.

TSAT – a public television network under ITE&C Dept., Govt. of Telangana – has earned a rare honour. It was selected for the Digital Transformation in Education Award instituted by Governance Now. TSAT, CEO Sri Shailesh Reddy received the award on 6 November, 2019 in New Delhi. Over the past three years, TSAT network channels have become very popular among the unemployed youth, particularly those residing in remote areas and who cannot afford paying fees for coaching.

Telangana State was presented with the Leading Digital State of India Award at a conference held by CMR in association with HP Inc. and Coeus Age Consulting. It was received by Sri Jayesh Ranjan, Principal Secretary, ITE&C Department, Government of Telangana. Sixteen other path-breaking digital initiatives by the government also received awards under Gems of Digital Telangana head. To know more about the specific awards Click Here

Minister Sri KT Rama Rao was chosen for ‘Leader of the Year’ award for presenting the young State of Telangana in a new perspective to the world using Global Entrepreneurship Summit 2017 as a platform and increasing investments in Telangana State.

Mr KT Rama Rao, Hon’ble Minister of IT, Government of Telangana has been honoured with the ‘SKOCH IT Minister of the Year Award’. He has been conferred this Award during a ceremony which took place during 49th SKOCH Summit on 9th September 2017 at New Delhi.

TASK (Telangana Academy for Skill and Knowledge) has been awarded the prestigious SKOCH Platinum Award for revamping Skilling Initiatives for Youth in Telangana State. A unique skill development initiative from IT,E&C Department which aims at improving the quality of graduates coming out of colleges are gaining recognition throughout the country.

Telangana State Board of Intermediate Education (TSBIE) has been selected for SKOCH Award for providing online services and also another award for bringing reforms in conducting the Intermediate examinations. The award was presented to the Board Secretary Dr. Ashok in New Delhi.

Telangana Police’s Hawk Eye mobile app has been selected for National e-Governance Gold Award for 2016-17 under the category of Innovative Use of Mobile Phone Technology in e-Governance. The Award is instituted by Department of Administrative Reforms and Public Grievances and Department of Electronics and Information Technology, GoI. Commissioner, Hyderabad Police received the Award from Union Minister of State, Ministry of Electronics and Information Technology Sri PP Chowdary at the National Conference on e-Governance held on January 9 & 10, 2017 at Visakhapatnam, Andhra Pradesh. Hawk Eye App was the only eGov initiative from a Police Department out of all the 20 Awardees selected under 12 categories.

Telangana Police get MEA’s ‘Certificate of Recognition’ for VeriFast

Telangana State won two Awards at the 19th Express Technology Sabha Awards held at Kochi, Kerala on 20 February, 2016 under ‘Innovative Use of Technology in Delivery of Citizen Centric initiatives’ category. Body-worn Camera initiative of Police Department and eVahan Bima initiative of Transport Department has got laurels to the State. A V Ranganath, IPS, DCP Traffic, Hyderabad and Sandeep Kumar Sultania, IAS, Transport Commissioner, Hyderabad have received the awards on behalf of Police and Transport Departments respectively.

Minister KTR chosen for Audi-Ritz Inspirational Icon of the Year

Minister KT Rama Rao received the Audi-Ritz Inspirational Icon of the Year Award (Politics) for 2015 in Bengaluru on 13 December, 2015.